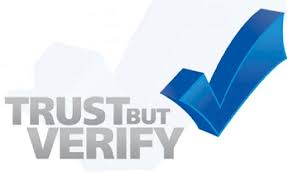 Self-reported grade inflation is a common occurrence: everybody wants to be ranked at the top.
And who’s going to notice if a folks take a few liberties with the truth?
Verification and reference checks are so 20th century.
Besides, if someone aspires to have a particular type of certification, isn’t that what’s really important?
WRONG! Trust but verify.
By James Niccolai in ITWorld.
Emphasis in red added by me.
Brian Wood, VP Marketing
———