Disrobing the Truth About Senior Executives 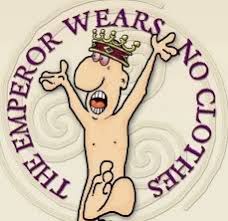 “The emperor wears no clothes!”
Oh wait, maybe I meant to say, “The emperor looks at websites of people who wear no clothes!”
Summary article by David Weldon in FierceCIO, original article by Steve Ragain in Network World.
Emphasis in red added by me.
Brian Wood, VP Marketing
———

From phishing to adult content, many CEOs benefit from analyst cover-ups

Call it one of IT’s dirty little secrets. One of the biggest threats to security in most organizations is the behavior of senior executives, a new study by ThreatTrack Security reveals. The sins include installing malicious applications, allowing family members to use corporate devices and surfing for adult content. And in a majority of cases, the incidents go unreported.
Last month, ThreatTrack commissioned a blind survey of 200 security professionals who are charged with malware analysis, according to a report in Network World. The survey was conducted by Opinion Matters on behalf of ThreatTrack. Readers may know ThreatTrack as the company responsible for the VIPRE anti-virus application.
The survey revealed that:

The survey findings were not trivial, and in fact, a majority of malware analysts spend significant time cleaning up after the boss.
As Network World noted, “66 percent of them had to deal with a security incident that later went unreported by the company. Further, the source of the incident can be tracked back to a senior executive within the organization most of the time, and many of the problems could have been avoided.”
A key point in the statement above is the fact that security pros are covering up their exec’s bad behavior in most cases. In fact, 79 percent of survey respondents said they keep quiet about these distractions to their work schedule. But distractions they certainly are. Performing analysis takes one to two hours for 45 percent of malware analysts, and two to five hours for another 39 percent.
But malware analysts are sitting on more than just the bosses’ goofs. They are also failing to disclose outside data breaches in many cases.
“Over 50 percent of the analysts included in the survey claimed that they’ve investigated or addressed a data breach that the company didn’t disclose to customers, partner or stakeholders,” PC Magazine reported. “The study revealed that larger companies are three times as likely to not disclose data breaches than smaller ones.”
http://www.fiercecio.com/story/phishing-adult-content-many-ceos-benefit-analyst-cover-ups/2013-11-11
——-

Senior executives blamed for a majority of undisclosed security incidents

Malware analysts find that many of the undisclosed issues could have been easily avoided
CSO – According to a report from ThreatTrack Security, the company responsible for VIPRE Anti-Virus, a majority of malware analysts say that they’ve investigated or addressed a security incident that was never disclosed by their company. Moreover, many of those unreported incidents were caused by a senior executive within the organization.
In October, a blind survey of 200 security professionals dealing with malware analysis, conducted by Opinion Matters for ThreatTrack, shows that 66 percent of them have had to deal with a security incident that later went unreported by the company. Further, the source of the incident can be tracked back to a senior executive within the organization most of the time, and many of the problems could have been avoided.When it comes to how these easily avoided incidents occur the study’s respondents cited policy violations and careless behavior as the most common reasons. For example, installation of a malicious mobile application (33 percent); allowing a family member to use the company-owned device (45 percent); phishing (56 percent); or accessing pornographic websites (40 percent), were the top reasons listed.
Criminals target people first and platforms second, and in IT it’s an unfortunate reality that most executives are exempt from policy enforcement and security restrictions. So it comes as no surprise to see Phishing as the top source of infection, followed by allowing unauthorized users on company devices. When people become low-hanging fruit easy for the picking due to blatant disregard for, or an absence of, security policy — criminals have a readymade attack surface to exploit.
In Q3-2013, criminals targeted some of the world’s largest brands and most popular news sources as a means to lure victims into their malicious nets.
According to Malcovery, a company that focuses phishing trends and protection, Facebook, WhatsApp, UPS, Wells Fargo, and Companies House (UK), HMRC were the top five brands targeted by phishing campaigns this last quarter. In one case, people infected by the malware delivered by HMRC related Phishing emails in the morning, were sending entirely different malware and Phishing emails by the afternoon.
“We quickly discovered that malware delivered by one spam campaign early in the morning was generating spam which was delivering a different malware shortly thereafter,” Malcovery’s Brian Griffin told CSO.
“We found it interesting for a couple of reasons, but most notably because it sheds light on the sort of effect your infected machine can have on others as well as how valuable that compromised machine is to the bad guys.”
In their Q3-2013 report, Commtouch noted that global news events were being exploited by criminals within 22 hours of their announcement, including real-time malware campaigns focusing on news of the royal baby Prince George, NSA whistleblower Edward Snowden, and the ongoing crisis in Syria.
Commtouch also noted that Phishing common brands, such as PayPal, was a regular occurrence last quarter. In fact, PayPal Phishing alone accounted for the development of 750 new phishing websites per day. In Q3-2013, the average daily amount of spam for the quarter was 69 billion messages. Of those, 2 billion had malware attached directly.
“Malware analysts and CISOs face enough challenges trying to protect their companies’ networks from external threats. They certainly don’t need internal forces hindering those efforts,” the ThreatTrack report concludes.
“Yet that seems to be what’s happening, with senior executives who let family members use corporate PCs and can’t keep away from pornographic websites. And then there are the undisclosed data breaches. Not only are unreported compromises doing a disservice to customers, they may even be inhibiting proper attention that needs to be placed on the cybersecurity industry in general.”
http://www.networkworld.com/news/2013/110813-senior-executives-blamed-for-a-275779.html