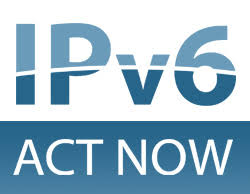 A finite, non-renewable resource in high demand will eventually be depleted.
IPv4 addresses are in this category.
Predictions are that December of 2014 is when ARIN (American Registry for Internet Numbers, the entity that manages the distribution of Internet number resources, including IPv4 and IPv6 address space and AS numbers) will have no more IPv4 addresses to allocate.
Good news: AIS networks are IPv6 enabled. We can help you.
Summary article by Nicole Henderson in The WHIR, infographic from Network Utility Force.
Emphasis in red added by me.
Brian Wood, VP Marketing
——–

IPv4 Addresses to be Depleted by December 2014: Infographic

Singapore has the highest number of IPv6 certified engineers as well as the highest percentage of IPv6 capable networks (38.57 percent) compared to other countries around the world, according to an infographic released on Monday.
Network Utility Force, an organization that provides IPv6 training and IPv6 network design and implementation, released the infographic to provide a look at the IPv6 migration landscape and some challenges in IPv4 exhaustion this year.
“Based on our IPv6 work to date, including work for our current customers, 2014 appears to be the year ARIN will have no more IPv4 addresses to allocate,” Brandon Ross, co-founder, CEO and Chief Network Architect of Network Utility Force said. “To that end, we expect 2014 to be a growth year for IPv6 migrations and deployments, and thus, forecasting and budgeting at the beginning of the year will be important, as engineering resources are limited.”
While Network Utility Force has an obvious motive for releasing the infographic, it does provide an interesting look at international adoption of IPv6.
According to the infographic, IPv4 addresses will be depleted by December 2014.
Last year, a report by non-profit group The Internet Society predicted that more than half of Internet users around the world will be IPv6 connected by 2018.
http://www.thewhir.com/blog/ipv4-addresses-depleted-december-2014-infographic