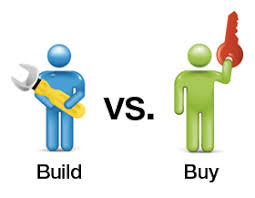 Build vs. Buy — business decision-makers should be agnostic, yes?
This evaluation is especially true in the realm of IT infrastructure, where rapid change is the norm and economics can be turned sideways with the introduction of new, or improved, technologies.
Rick Kurtbein of 451 Research wrote the piece below; my post-Valentines wish is that all leaders read and heed. If it’s not core to your business (or government charter), then there is little need to build, own, and operate it.
Emphasis in red added by me.
Brian Wood, VP Marketing
———–

Three and a half years ago, the State of Washington approved the sale of $300m in bonds to build a new 160,000-square-foot office complex and a 160,000-square-foot datacenter in Olympia for the Department of Information Services (DIS). The agency had lobbied for several years for a new datacenter, because its existing datacenter in Olympia was approaching capacity limits. The project now needs a $34.4m subsidy to cover lease payments and smaller project costs over the next two years. With the invoices now landing at the Legislature, the House Appropriations Committee chairperson said that the state must pay up and try to find ways to lessen the tax burden.
In 2011, the state created the Consolidated Technology Services (CTS) agency and appointed Rob St. John to manage the Jefferson Street facility. Appearing before a recent a legislative committee, St. John said that the agency needed help and that the project was built much larger than the state needed due to an apparent gross miscalculation of the state’s data storage needs. St. John said that $25.1m of the request is to cover debt service on the lease-to-own structure. CTS is moving data operations from its sites into one of the facility’s four large data halls, but that the agency had been unable to attract other paying tenants from the private sector or other government agencies to move in to reduce the state’s debt. In a search for revenue, CTS entered into an agreement Jones Lang LaSalle, which has a Seattle office, to help land tenants.

The datacenter is in the state capital, Olympia, roughly 60 miles from Seattle. There are currently two halls, one of which will be occupied by the state while the other is up for lease. The facility also has 30,000 square feet of shell space available for future expansion. The datacenter for lease has 13,000 square feet of raised floor and 2.25MW of critical power, with a power density of around 175 watts/square foot.
The state’s datacenter is 15,000 square feet with 2.25MW of power. There is also 160,000 square feet of office space for the Department of Information Services nearby. The tenant will share power and cooling infrastructure with the state, which has outsourced the maintenance of electrical/mechanical systems to McKinstry. The facility uses 100% airside economization. It is being marketed by Conan Lee of Jones Lang LaSalle, who says the facility is being priced at a lower rate than competitor datacenters in the area.

Wholesale datacenters in the area

Given that there are few large enterprises in Olympia, it seems likely that this datacenter will compete with other wholesale datacenters in the area. The nearest is the Benaroya South Hill datacenter in Puyallup. That facility is partially leased to Marvell Technology Group, but has 56,000 square feet (8MW) built out in total with a 70,000 (12MW) shell available as a build-to-suit.
Closer to Seattle, Sabey Corp has wholesale space available in Tukwila. Hines may also have some space available at Fisher Plaza in downtown Seattle for a smaller build. Farther afield, there are providers in Central Washington that already have facilities built such as Sabey in Quincy and Server Farm Realty in Moses Lake. Vantage has capacity for a build-to-suit in Quincy as well. Finally, Fortune Data Centers is building wholesale space in Portland, Oregon.

We have said from the outset that this datacenter build was a bad idea. We think the State of Washington simply dismissed all options and forged ahead with building its $300m datacenter without doing a proper build vs. buy vs. lease analysis. State Representative Reuven Carlyle, a longtime critic of the project, said back in 2009 that he thought the effort represented Olympia interests in the construction project and jobs, rather than a well-researched approach. Now in 2013, even House Appropriations Committee chair Ross Hunter said that he regretted his own vote that helped the project move forward and that he thinks it was a bad capital budget decision in 2009 to build the datacenter. We hope that more government datacenter projects come under greater scrutiny, as we have seen far too many of them.
Will the CTS agency have success in leasing its unused space even at lower prices than competitors in the region? We suspect CTS will find it challenging going. The state built an enterprise-quality datacenter, but how many enterprise customers will risk critical infrastructure within a facility managed and monitored by a state agency rather than with an experienced team of knowledgeable multi-tenant datacenter (MTDC) senior management executives and datacenter operational specialists? What kind of process maturity will the CTS team bring to monitoring, testing and troubleshooting the datacenter’s electrical and mechanical systems? We simply do not believe state agencies should be in the MTDC space.
https://451research.com/report-short?entityId=75931