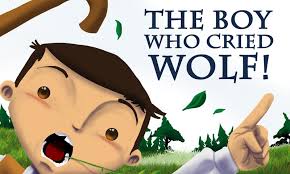 The Boy Who Cried Wolf is one of Aesop’s Fables.
According to an inside source at Wikipedia, “The tale concerns a shepherd boy who repeatedly tricks nearby villagers into thinking a wolf is attacking his flock. When one actually does appear and the boy again calls for help, the villagers do not come thinking that it is another false alarm and the sheep are eaten by the wolf”.
The post below is about the opposite. There actually ARE wolves attacking the flock, but we are thinking that it’s just another false alarm.
I wonder: who needs to cry what in order to save the sheep?
Posted in Help Net Security.
Emphasis in red added by me.
Brian Wood, VP Marketing
——-

Most people have done nothing to protect their privacy

Over 260 million people have been victims of data breaches and increased risk of identity theft since the Target revelations, yet nearly 80 percent have done nothing to protect their privacy or to guard their financial accounts from fraud, according to idRADAR.

“There is a national data breach epidemic, and consumers shockingly show very few signs of concern. Most are taking no measures to protect themselves,” said Tom Feige, CEO of idRADAR.
The poll showed that most people don’t even take the time to change their passwords. Less than 10 percent adopt new passwords monthly and about 58 percent said they would only do it when forced to by a website or vendor.
Roughly 93 percent of the adults surveyed think that after a breach, they would want the company involved with the breach to offer them free credit monitoring.
Further, 70 percent of consumers say they still use their debit cards, despite the warnings by retailers of the increased risk of debit over credit cards.
“Clearly, consumers do not want to take responsibility for protecting themselves before or after a serious breach. They want someone else to worry about it,” said Feige.
54 percent don’t believe current credit card and identity theft monitoring services on the market are worth the money.
“Most people want to rely on the government to protect them,” he said. “And they don’t seem to care if their personal privacy rights are threatened.”
According to the survey, 55 percent are more concerned about the threat of data breaches than about the government monitoring their private phone conversations or their email.
But government regulations on cyber-security are a hodge-podge of safeguards and are inconsistent from state to state, Feige said.
“We at idRADAR believe the federal government has to step up and pass a comprehensive data breach law to protect consumers in all states. However, only 41 percent of consumers in our survey agreed with that conclusion,” said Feige.
There is a lack of knowledge about the issue of cyber security, according to the survey. Over half of the people surveyed admitted they had not even heard of the recently well-publicized Heartbleed flaw.
“People are not paying enough attention to this critical problem, and their lack of knowledge on the entire subject is frankly very alarming,” said Feige. “Obviously there is a great need for education on this issue, and consumers must pressure Congress to act to enact safeguard regulations,” he said.
The survey was conducted in May 2014 by idRADAR among a national random sample of 313 consumer respondents, reflecting a wide range of age, economic and educational groups. The survey has a plus or minus 2 percent accuracy rate. Feige says his company plans to conduct this survey on a quarterly basis and measure consumer trends on data breach and personal ID theft prevention and government regulation issues.
http://www.net-security.org/secworld.php?id=16970