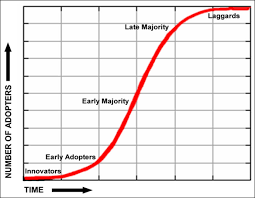 While a bit breathless in its presentation of results from their fourth annual cloud survey, the results are relevant and useful if not especially newsworthy.
Posted on the North Bridge Venture Partners website.
Emphasis in red added by me.
Brian Wood, VP Marketing
——

First “Cloud Front” Is Strategic But Transitional; Cloud Native Platforms And Thousands Of Services Predicted To Drive Transformational Apps In Second “Cloud Front”; Data Wants To Be Bigger In The Cloud For Consolidation, Collaboration And Cloud Scale Analytics

SAN FRANCISCO – June 19, 2014 – North Bridge Venture Partners, in conjunction with Gigaom Research and a record 72 collaborating organizations, today released results for its fourth annual Future of Cloud Computing survey. This survey is the industry’s deepest and broadest examination of the cloud technology revolution. It analyzed the inhibitors and drivers behind cloud adoption, separating the hype surrounding the cloud from genuine industry trends and real world cases across a sample of 1358 respondents.
See the complete findings slideshow here: 2014 Future of Cloud Computing survey, along with analysis and commentary on the results here.
“With four years of data, we’re now really beginning to see some interesting trends, such as the five-fold increase in SaaS adoption to 74% and the nearly six-fold increase in PaaS adoption to 41%.” said Michael Skok, founder of the Future of Cloud program and General Partner, North Bridge Venture Partners.
Select Highlights from the Survey Data:

49% of respondents in this year’s survey are using cloud to fuel revenue generation or new product creation.
45% of businesses say they already, or plan to, run their company from the cloud showing how integral cloud is to business.

SaaS Adoption Has More Than Quintupled…

…from 13% adoption in 2011 to 74% in this year’s survey, but in the enterprise it is still mostly transitioning existing applications.
The front office is leading the way with sales and marketing at 51% adoption, customer service, and analytics both at 43% adoption.

Data Wants To Be Bigger In The Cloud

Two-thirds of respondents believe their data will come to reside in some form of cloud over the next two years as bigger data needs consolidation, and collaboration & creation go online.

“This wave of cloud computing that’s revenue and new business driven is good news for long-suffering IT execs,” said David Card, Vice President of Gigaom Research. “If they can offload tedious but necessary cost-center functions, and refocus resources on cloud-driven new business, they might be able to retake their seat at the C-table.”
“Even though it’s largely just a transition of existing apps, the first cloud front has rolled in confidently each year as existing applications transition to the cloud and are adopted as SaaS solutions. Cloud is now integral to business with 45% of executives saying they currently or plan to run their business in the cloud,” said Michael Skok, General Partner at North Bridge Venture partners.

Transformation In The Cloud – The Second Cloud Front

“With over 11,000 Cloud Services / APIs, and developer adoption of IaaS at 56% and PaaS at 46% respectively we are going to begin seeing the birth of new, re-imagined, cloud-native applications,” said Skok. “These applications, which are only possible in the cloud, will result in an order of magnitude greater value creation than the first cloud front. This second cloud front will be transformative,” Skok continued.
For more about this second cloud front please visit the “2014 Future of Cloud Computing” results page.

Data Wants To Be Bigger In The Cloud

“If you get your head out of the sand and into the clouds you’ll see the explosion of cloud-created data. It’s not just big data it’s exhaustive data, as everything from clickstreams to commerce and personal cloud lockers create exabytes of data. According to Cisco, personal, cloud-carried data alone is estimated to grow from 1.7 exabytes in 2012 to 20 exabytes by 2017,” said Skok.

Over the last few years, the drivers for cloud adoption have remained constant with agility, cost and scalability as the top three. One area that has moved up the agenda as a driver though is that companies are increasingly moving workloads to the cloud to switch CapEx for OpEx. This is especially true for large companies with more than 5,000 employees.
On the inhibitor front, security continues to be a strong barrier with 49% of respondents concerned about how secure their data is in the cloud. Privacy concerns also rose once again to 31% in 2014 as increased tension manifested itself between the desire for anonymity and the convenience and utility of personalization. This is an area for vendors and enterprises to distinguish themselves as faithful custodians of personal data and engendering trust.
Of note, interoperability as an inhibitor saw a significant decrease from 27% last year to 17% in 2014 with greater attention being paid to issues like data portability. However, fear of vendor lock-in was still 29%, which put focus on open source cloud projects, like OpenStack, that have grown significantly. For more information on the drivers and inhibitors of cloud see this post.
The survey clearly demonstrates that SaaS is the strongest area of adoption for cloud and is driving everything. Consequently, we will conduct a second phase of the survey to explore the hot companies and issues in this exciting area during the Fall 2014. If you would like to be part of the collaboration, the conversation and potentially shape the upcoming SaaS survey click here.
2014 Future of Cloud Computing Survey Collaborators: