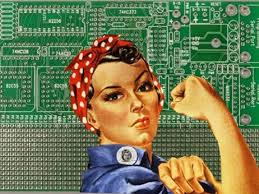 As a “progressive” father of a bright tween daughter, I have a strong personal interest in the opportunities and stereotypes that exist for women in our society.
The survey results below, summarized by Caron Carlson in FierceCIO and originally published by Kurt Wagner in Forbes, cast new light on our reality.
What’s most interesting to me are the results where men and women have the biggest gap in their responses.
Emphasis in red added by me.
Brian Wood, VP Marketing
———–

Survey: Men, women agree on what keeps women out of IT

Women still face a number of persistent deterrents to entering the tech industry, but the good news is that men seem to understand this, and they agree on what should be done about it.
A lack of female role models and old stereotypes are major deterrents, according to both women and men, reports Kurt Wagner at Forbes.
This news is based on a survey of 7,000 people conducted by the online freelance job marketplace Elance. Elance posts more than 1 million jobs annually, about half of which are tech jobs. Interestingly, online sites like Elance’s provide more opportunities for women, according to nearly three-fourths of the women who participated in the survey.
“For women in tech, online work is a level playing field. It provides access to jobs purely based on merit and results and really, in some ways, neutralizes some of the gender discrimination that exists around the world,” said Fabio Rosati, CEO at Elance.
When asked what they thought it would take for women to be successful in tech, 65.5 percent of the women and 46.8 percent of the men answered equal pay for equal skills.
http://www.fiercecio.com/story/survey-men-women-agree-what-keeps-women-out-it/2013-05-01
———–

The biggest deterrent for women in tech

New survey results from job marketplace Elance
FORTUNE — A new survey by online job marketplace Elance found that men and women share similar opinions when it comes to women working in the tech industry.
The results, which consisted of answers from close to 7,000 freelancers mainly in the U.S., found that both males and females agree on the top deterrents keeping women out of the tech industry, the changes that need to be made, and the overall outlook of women in tech moving forward.
Most notably, both male and females respondents reported that a lack of “female role models” in the tech community is the top deterrent for why more women aren’t pursuing tech-related careers. Only 18 companies from last year’s Fortune 500 list boasted female CEOs at the list’s release. (Eight female CEOs ran companies in the top 100, four of which were tech companies.)
Another major deterrent observed by both genders: programming and technology stereotypes.
Elance CEO Fabio Rosati says his company pursued the topic of women in tech after discovering that female freelancers’ earnings were growing 20% faster on Elance than mens’ earnings. “For women in tech, online work is a level playing field,” he says. “It provides access to jobs purely based on merit and results and really, in some ways, neutralizes some of the gender discrimination that exists around the world.”
Elance posts nearly 1.2 million jobs per year, according to Rosati, over 50% of which are classified as tech postings. The site fills just over half of its postings, and has a user base that is 45% women.
Of the nearly 3,000 women surveyed, 74% of them said that online sites like Elance that eliminate factors like gender, location, and an applicant’s physical appearance offer more work opportunities for women. Close to 60% of women also said that working online allowed them to spend more time at home with their families.
Overall, both males and females showed optimism for the future of women in tech. Here are some of the survey’s key findings: